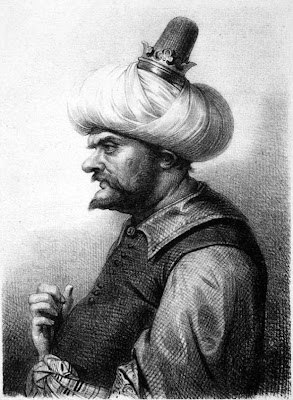 Oruç, or Aruj, was born around 1474 on Lesbos to the Turkish Sipahi, Yakup Aga. After helping the Ottomans conquer Lesbos from the Genoese, Yakup Aga settled down on Lesbos, where he met and married Katerina, with whom he had four sons: Ishak, Aruj, Hizir, and Ilyas. When he moved to Lesbos, Yakup bought a ship to become a merchant. All four of his sons, including Aruj, helped their father with his trade.

The four brothers all became seamen, trading throughout the Mediterranean, but mainly within the Levant, the oceans between Anatolia, Mesopotamia, and Egypt. During his career as a merchant, Aruj learned how to speak Italian, Spanish, French, Greek, and Arabic, but later Aruj, Hizir, and Ilyas became privateers to counteract the power of the Knights of St. John, privateers from the island of Rhodes. While on their way back from a trading expedition,  Ilyas and Aruj were attacked by the Knights of St. John. Ilyas was killed and Aruj was imprisoned for almost three years. Aruj's brother Hizir tracked down Aruj and helped him to escape.

On a trip to the Ottoman city of Antalya, the governor of Antalya, Ottoman prince Shehzade Korkud, gave Aruj 18 galleys to fight the Knights of St. John because the Knights were damaging the Ottoman ocean trade network. When Shehzade Korkud became the governor of Manisa, he increased Aruj's fleet size to include 24 galleys. Aruj also helped when Korkud was sending a naval expedition to Italy. Aruj bombarded several coastal cities and captured two ships while there. He also captured four more ships on his way back to see Korkud. Korkud, though, had fled to Egypt after a dispute of succession to the Ottoman throne. Aruj went to Egypt, and with the help of Korkud, gained an audience with the Mamluk Sultan, Qansuh al-Ghawri. The Sultan gave Aruj another ship and charged him with raiding the coasts of Italy and any other Christian powers within the Mediterranean. In 1503, Aruj did as told and moved west from Egypt towards Sicily. He captured three more ships before making a base on the island of Djerba, which is off the coast of Tunisia. Aruj's brother Hizir sooned joined Aruj at Djerba, though a year later, they requested that Tunisian Sultan Abu Abdullah Mohammed Hamis allow them to use the port of La Goulette for their operations. The Sultan agreed as long as Aruj and Hizir gave one third of their booty to him. Aruj and Hizir gained more power within the Mediterranean, capturing the Cavalleria, which had 380 Spanish soldier and 60 knights on board. They also raided th coast of Calabria. These accomplishments gained the two brothers more fame, and their fleet was soon merged with those of other Muslim privateers. In 1509, Aruj's older brother Ishak joined him as well. As Aruj's fame grew, he earned the name Baba Oruç (Father Aruj), or Barbossa to the Europeans. In 1512, Aruj lost his left arm in a battle with a Spanish ruler, which Aruj soon replaced with a silver prosthetic. The three brothers continued to raid the coasts of Italy, France, and Spain, gaining more power as they did. In 1514, the brothers attacked the city of Bougie with 1,000 men. After they took the city, they moved on, taking Jijel and Mahdiya as well. In 1516, the brothers laid seige to the Castle of Elba with the help of privateer Kurtoglu.

In 1516, the brothers took control of the area surrounding Jijel and Algiers. When Emperor Charles V, King of Spain, failed to help the Spaniards of Algiers, Aruj declared himself as the new Sultan of Algiers. With his new power, Aruj took Miliana, Medea, and Tenes. To protect Algiers from falling into Spanish hands, Aruj relinquished his title to the Ottomans in 1517. Aruj was appointed as Bey, or governor, of Algiers, an Beylerbey, or chief governor, of the West Mediterranean.

On orders from Spain, Abu Zayan, ruler of the city of Tlemcen, planned to attack Aruj, but Aruj found out about the plan and took Tlemcen in a surprise atttack in 1517. When Aruj had Abu Zayan executed, Emperor Charles V came to take care of Aruj himself. With 10,000 Spanish soldiers and thousands of Bedouins, Charles marched on Tlemcen in 1518. Aruj and Ishak defended the city with their force of 1,500 Turks and 5,000 Moors, but it was not enough. Though the two brothers held off the Spanish for twenty days, they were eventually killed in battle. Hizir, the last surviving brother of Aruj, inheritted Aruj's title of Beylerbey and continued to attack ships throughout the Mediterranean. Aruj is on our list because nobody ever hears about the pirates of the Mediterranean. Also, Aruj is one of the few pirates so powerful that he became a Sultan himself. Aruj, while he was alive, was one of the most power and famous people in the Mediterranean.

Posted by Brahms Lewis at 4:39 PM No comments: