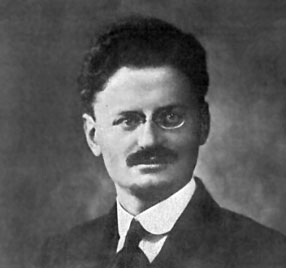 Lev Davidovich Bronstein was born on Nobember 7, 1879, the son of a Jewish Farmer in what is now Ukraine. When Bronstein was eight, his parents sent him to school in Odessa. Bronstein stayed in Odessa until 1896, when he moved to Nikolayev for his final year of school. It was in Nickolayev that Bronstein learned the ideas of Marxism. Bronstein began meeting with political exiles and surrounding himself with other men with revolutionary ideas.

In 1897, Bronstein helped to found the South Russian Workers' Union, which got him arrested. To years later, Bronstein was put on trial and sent to Siberia. In Siberia, Bronstein met his first wife, Alexandra Lvovna, who was also in prison as a revolutionary. The two had two daughter's during Bronstein's stay in Siberia. Bronstein escaped prison in 1902, leaving his wife and two children behind. When forging a passport, Bronstein made a fake name, the name Leon Trotsky.

Under this name, Trotsky moved to London, where he met Vladmir Lenin, another revolutionary, and the two worked to founded the Social-Democrats' newspaper, Iskra. In 1903, Trotsky married his second wife, Natalia Ivanovna, with whom he had two more children.

In 1905, when Bloody Sunday occured, Trotsk decided to return to Russia, where he wrote numerous pamphlets to encourage the overthrow of the Tsar's power. That same year, Trotsky led a revolution which failed. Trotsky was arrested and sent back to Siberia. In 1907, Trotsky escaped with a deer-pulled sleigh. Trotsky fled the country, living in cities throughout Europe and America. Trotsky was in New York when the Tsar was overthrown, and arrived back in Russia in May of 1917.

Before Lenin died, he named Trotsky as his successor, but when Lenin died in 1924, Trotsky was politically outmaneuvered by Joseph Stalin, who pushed Trotsky out of politics and into exile, eventually forcing Trotsky to leave the Soviet Union all together.

Trotsky traveled the globe, living in Turkey, France, and Norway. In 1936, Trotsky moved to Mexico. Trostky, in exile, began writing again, criticizing Stalin. Stalin accused Trotsky of a conspiracy against the Soviet Union. This began Stalin's Great Purge, where Stalin began eliminating all his political enemies. Trotsky was number one on Stalin's list. In May of 1940, Soviet agents machine-gunned Trotsky's house, but he was not killed. The Great Purge ended on August 20th, 1940, when Ramon Mercader hit Trotsky in the head with an ice pick.

Trotsky is on our list for being one of the few leaders of the Soviet Union to stick to the Marxist ideals. Also, anybody who defies Stalin for as long as Trotsky did deserves recognition.