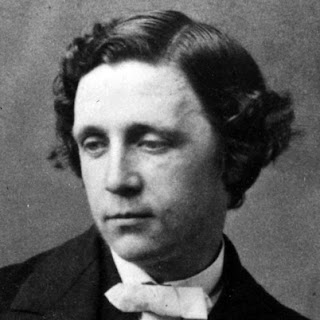 Lewis Carroll was born in England on January 27, 1832 as Charles Lutwidge Dodgson. He was born into a family of army officers and Church of England clergymen. Carroll suffered from a stammer, but was very smart for his age, supposedly reading The Pilgrim's Progress wwhen he was only seven. After an unhappy three years at Rugby School (from 1846 to 1849), Carroll went to Christ Church college in Oxford, where he earned considerably honors in the field of mathematics.

In 1856, Dodgson began learning photography under his uncle, Skeffington Lutwidge, and continued on to become a famous 'gentleman photographer'. This job allowed Dodgson to enter higher society by making portraits of many notable people, including Michael Faraday and Alfred, Lord Tennyson. Dodgson stopped his photography in 1880, after taking over 3,000 images, though only about 1,000 survive. Dodgson later said he stopped because of the difficulty of keeping a working photography studio.

Carroll invented many games, including an early form of scrabble and the Word Ladder, where one word changes into another through a series of one-letter changes. He also invented the nyctograph, a writing device for note-taking in the dark. He also invented a steering device for a velociam tricycle, a new parliamentary system, and a rule for finding the day of the week for any date.

Lewis Carroll is best known for his two books, Alice's Adventures in Wonderland (1865) and Through the Looking Glass (1871). In these books, a young girl named Alice finds herself in the strange and random world of Wonderland, where she meets man strange characters, including a talking Dodo, Humpty-Dumpty, Tweedledee, Tweedledum, a hookah-smoking caterpillar, a smiling cat, and the Mad Hatter. Many suspect that Alice is based on the daughter of Henry Liddell, the Dean of Christ Church, but Carroll denied these theories. These two books have given us such works of literature as Jabberwocky and The Walrus and the Carpenter. The same nonsense style found in these books is found again in Carroll's last great work, The Hunting of the Snark (1876).

Dodgson, due to his continued teaching of mathematics at Christ Church, wrote almost a dozen books on geometry, matrix algebra, and mathematical logic. Dodgson also used mathematics to create his own voting system, now known as Dodgson's Method. His mathematical work is what gave Dodgson the financial security to pursue other interests.

After publishing The Hunting of the Snark, Carroll became less popular as an author, though he was now able to live on money from his previous books. He continued to teach at Christ Church until 1881. Carroll died on January 14, 1898 from pneumonia following influenza. Carroll is on our list for being successful due to the complete sense of random in his books. He is also on here for being a Renaissance Man of sorts, covering many subject areas over the course of his life.