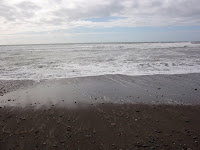 02 Ferdinand Magellan
Ferdinand Magellan (1480-1521) was a Portuguese navigator who worked for the Spanish king, Charles I. Magellan claimed that he knew where the passage through the New World to Asia was, so in September of 1519, with five ships (the Trinidad, the San Antonio, the Concepcion, the Victoria, and the Santiago) Magellan set out west with 270 men. After almost a year of sailing and two unsuccessful mutiny attempts, Magellan found a passage to the Pacific, which he named the Strait of All Saints. This strait was later renamed the 'Strait of Magellan'. During the Voyage through the Strait of All Saints, the captain of the ship, the San Antonio, turned around and went back towards Spain. Because the San Antonio was a supply ship, the men had to lower their rations for the trip through the Pacific. Soon, men were surviving on sawdust, leather strips of sails, and rats, and scurvy ran rampant through the crew. The crew finally got fresh fruit again in March of 1521, when the ships reached Guam. Later in that month, they made it to the Philippines, where Magellan befriended a local king. Unfortunately, this made him enemies with another local king, Lapulapu. On April 27, 1521, Magellan was killed in a battle. The remaining ship was led to Spain by Sebastian del Cano. Although only 18 men survived the whole trip, the spices and goods collected during the voyage cost more than all the 5 ships put together. The only ship to return, the Victoria, was the first ship to circumnavigate the world. Although Magellan didn't finish the trip, he was the designated leader, fought starvation, local wars, and mutiny, and was rewarded by getting 18 men around the world.
Information from...
www.mariner.org/education
Posted by Brahms Lewis at 8:47 PM No comments: