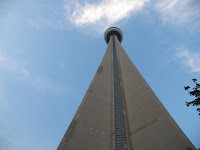 The Communications Network Tower (The CN Tower) is a tower standing high over the city of Toronto, Canada. This great tower was created by a private company called CN Tower Ltd, an affiliate of Canadian National Railways. A revolving restaurant sits near the top, at 1,148 ft (350m), just above this, there is an observation deck at 1,509 ft (460m) high, but what makes this building great is that its spire is at 1,816 ft (553m) high, making it the third tallest tower in the world (not including guyed masts and drilling platforms). The tower is only behind TV & Sightseeing Tower and the Burj Khalifa. The construction of the CN Tower began in February 1973 and finished in 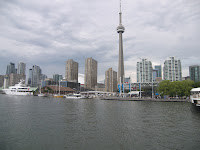 June of 1976. The tower stands on a foundation plate 17 ft ( 5.5m) thick with a diameter of 229 ft (70m).
The floor of the bottom observation deck is made of glass, fully of glass, but because of the height, some people refused to get out of the elevator when they saw the ground, the floor was carpeted except for one small area of the floor, where people still look down at the ground in amazement. The CN Tower now is the regarded as the most artistically significant telecommunications tower and as the symbol of Toronto.
Posted by Brahms Lewis at 8:17 PM No comments: