The Foundation of the Jesuit Order (August 15th) 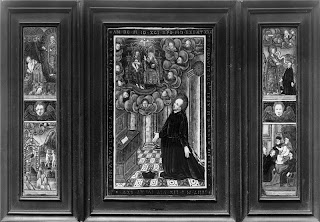 Saint Ignatius of  Loyola was a soldier for the kingdom of Castile in what is now Spain. For many years, he fought Moors, helping to remove their presence from the Iberian Peninsula. In 1521, Ignatius had a leg broken and the other injured by a cannonball. While recovering, Ignatius read De Vita Christi by Ludolph of Saxony. This commentary on the Gospel gave Ignatius a better understanding of Christianity.

Ignatius began to gain companions in his practice of sacrifice. Soon, he had six companions with him: Francis Xavier, Alfonso Salmeron, Diego Laynez, Nicholas Bobadilla, Peter Faber, and Simao Rodrigues. On August 15th, 1534, these seven men took apostolic vows and formed the Society of Jesus, which became better known as the Jesuit Order.

The Jesuit Order is engaged in evangelical and apostolic ministry. The path of sacrifice that Ignatius of Loyala used became a central part of the Jesuit Order. The Jesuits would sacrifice all they had to spread across the globe and educate people on the Gospel.

Ignatius of Loyala went on to become the Father General and leader of the Jesuits. St. Francis Xavier became famous in his own right for being one of the first people to visit Japan and evangelize to the people there. The Jesuit Order has continued to grow since its foundation and has spread out into 112  nations on six continents.

Posted by Brahms Lewis at 9:40 PM No comments: