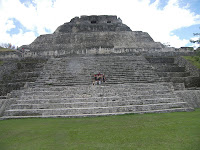 Xunantunich is a Mayan temple and the second tallest building in Belize. Xunantunich means “Lady of the Rock” in ancient Mayan. Unlike most Mayan temples, Xunantunich does not have stairs running all the way to the top of the pyramid. Instead, the stairs go only part way up. A ramp, which starts where the stairs finish, leads to a hill on the side of the pyramid where a small room is. The ramp continues out the back door of this room and back onto the backside pyramid, when the ramp is two levels lower than the top level, the ramp stops and a new flight of stairs continues up to the top of the pyramid. Archaeologists suspect that one of the Mayan rulers of this city was loosing the support of the city’s people so he built the pyramid with these unique features. He would climb up the first short flight of 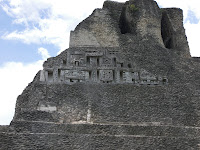 stairs and go up the ramp into the small room, where servants were waiting to dress him in fancier clothing. He would then go up the ramp and climb the next flight of stairs to the top where he would reappear in front of his people. This made it seem like he had left, a human, and came back as a god. This might have help gain the people’s trust.
Posted by Brahms Lewis at 8:14 PM No comments: