The Bombing of Hiroshima (August 6th) 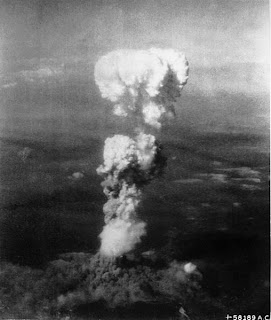 When Germany surrendered in May of 1945, the United States was able to focus all its efforts into the Pacific War. In June of 1945, the Joint War Plans Committee estimated that Operation Downfall would result in between 25,000 and 46,000 deaths. Soon afterwards, though, the Japanese began withdrawing troops from Manchuria to defend the home islands. The Japanese military force built up to the point that there were 2.3 million Army troops, 4 million Army and Navy employees, and a civilian militia 28 million strong. This build-up of Japanese forces increased the number of Allied fatalities to between 400,000 and 800,000.

At the same time, the Manhattan Project, Tube Alloys, and Chalk River Laboratories were hard at work. These were the respective projects of the United States, Canada, and the United Kingdom to design and build atomic bombs. The projects were started in 1939, and in July of 1945, the Manhattan Project had successfully detonated the first nuclear weapon at Trinity Site, though the destruction caused by the weapon was far more than anyone had expected.

Eventually, Harry Truman was forced to make a decision: to continue with Operation Downfall, and lose up to 800,000 Americans, or release atomic weaponry upon Japan. In the end, Truman chose not to risk American lives.

For previous air raids on Japan, the United States had dropped leaflets warning citizens of the danger, but in the case of the atomic bombings, the United States decided against dropping leaflets or detonating a demonstration bomb. This decision was made due to the uncertainty of a successful detonation and to maximize psychological shock.

On August 6th, 1945, Colonel Paul W. Tibbets flew his ship, Enola Gay, over the city of Hiroshima and dropped the atomic bomb, known as Little Boy, on the city. The blast created was equivalent to 16 kilotons of TNT, leading to the destruction of an area a about one mile (1.6 km) in circumference, and resulting fires spread across 4.4 square miles (11 square kilometers) of land. 69% of Hiroshima's building were destroyed and between 70,000 and 80,000 people, 30% of the city's population, were killed.

A second bomb, known as Fat Man, was detonated three days later, and a letter of surrender was sent on the 14th of August, ending World War 2.

Posted by Brahms Lewis at 9:26 PM No comments: