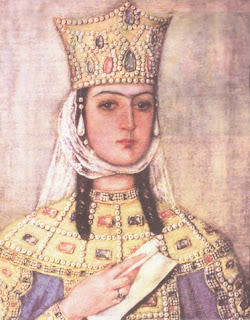 Tamar was born around the year AD 1160, the daughter of George III of Georgia. During her childhood, Georgia was in a state of upheaval. Many of the nobles of Georgia were rebellious and attempted to overthrow the king in 1177, but George quickly crushed the rebellion, and soon afterwards,  George decided to name Tamar as his heir. In 1778, Tamar was crowned as co-ruler of Georgia along with her father.


Ruled by the Nobles

In 1184, George III died, and Tamar became the sole ruler of Georgia. Along with inheriting the kingdom, Tamar inheritted her father's rebellious nobels, and they weren't too happy with having a female ruler. Tamar was the first ever female ruler of Georgia, and this led many nobles to question her legitimacy as queen. Tamar's claim to the throne was solidified only through Tamar's aunt Rusudan and the head of the Georgian Orthodox Church, catholicos Michael IV Mirianisdze. Even so, Tamar's early rein was basically run by the nobles. The nobles made Tamar appoint Michael IV as chancellor, putting at the head Georgian politics and religion. The nobles also forced Tamar to dismiss several of her father's political officers, and they even chose Tamar's husband for her. In 1185, Tamar married the noble-chosen Yuri Bogolyubsky, the son of a prince from North Caucasus.

Soon after the marriage, the chancellor and catholicos Michael IV died. Tamar quickly appointed her supporter, Anton Glonistavisdze, as chancellor. The death of Michael IV allowed Tamar to expand her power bases, taking more power away from the nobles. In 1187, Tamar had her divorce with Yuri approved on the basis of addiction to drunkenness and marital unfaithfulness. She then took David Soslan, an Alan Prince, as her husband. David Soslan was a very capable military commander and was a firm supporter of Tamar's rule. After the divorce, Yuri made two attempts at coup, but both were crushed by David. Tamar and David had two children during their marriage, both of whom would become rulers of Georgia. With her new power, Tamar revived the expansionist foreign policy of Georgia. Under David Soslan, Georgia was able to to take over several of the regional states, reduce Shirvan into a tributary state, and expand into the territory of the Great Seljuq Empire by 1204. In the same year, Tamar turned her attention to the southeast. The Byzantine Empire was very weak, partially due to the attacks by Muslim states in the Middle East, but mainly because of the Fourth Crusade that decided to attack Constantinople. Tamar took advantage of the Byzantines' weakness and helped to turn the Byzantine state of Pontic into the kingdom of Trebizond. Tamar had helped Trebizond because it gave Georgia a friendly neighbor to the south and it helped Georgia to affirm its position as the protector of Christianity in the middle east. Tamar was sending missionaries and supporting churches all the way to Cyprus, Egypt, and Bulgaria. Tamar also supported several monasteries within Jerusalem, and when Ayyubid sultan Saladin took Jerusalem in 1187, Tamar sent envoys to request that the the confiscated possessions of the Georgian monasteries be returned. Tamar created a friendly relationship with Saladin, and even when Western Europeans were not allowed into the holy land, Georgian pilgrims were.

Tamar died in 1213, shortly after her husband David Soslan had. Tamar is on our list because she was the first female ruler of Georgia. She also was able to take a kingdom on the verge of falling apart and turn it into an expansionist nation stronger than any of those around it. Also, as the Byzantine Empire deteriorated, Tamar turned Georgia into the leading Christian power within the Middle East, and while the Western Europeans continued to attack the Holy Land for the next 300 years, Tamar was able to get her pilgrims peacefully into Jerusalem whenever they wanted. Tamar is on our list because she made a small, obscure nation like Georgia into a thriving, strong power in the Middle East.

Posted by Brahms Lewis at 3:15 PM No comments: