Conrad of Montferrat (1145-1192) was a very well-known man during his time. He was the cousin to Holy Roman Emperor, Frederick I, King Louis VII of France, and Duke Leopold V of Austria. He was known across Europe for his courage and commanding skil 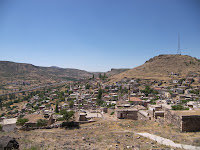 ls, being able to defeat Emperor Fredrick at Camerino in 1179, but was also trained as a diplomat. In 1187, he had one of the best positions in all of Europe when he went to join his father, Duke William V of Montferrat, in the Kingdom of Jerusalem, founded in 1099 by the crusaders. While Conrad was on his way to Jerusalem, the kingdom was under attack by the Seljuk Turks, led by Saladin. When Conrad arrived, both his father and Guy if Lusignan, king of Jerusalem, were prisoners of Saladin, captured in the Battle of Hattin. Because both Jerusalem and Acre had been captured, Conrad sailed to the port of Tyre, which was undergoing a siege, in hopes of rescuing it. Supposedly, Saladin offered to give up Conrad's father if Conrad gave up Tyre, but Conrad is said to have told Saladin that Conrad's father had lived a long life, and pointed his own crossbow at his father. Whatever happened, though, Conrad got his father back, and in December of 1187, Conrad launched a counter-attack and drove away Saladin's troops for the moment. Saladin later released Guy of Lusignan, who demanded that Conrad hand over the keys to the city, but Conrad said that Guy had lost the throne and would not let Guy and his wife to enter for quite some time. Conrad tried to reinforce his claim on the throne by marrying Isabella of Jerusalem, who, unfortunately, was already married, but Isabella's mother had the old marriage annulled, and the couple married on the 24th of November in 1190. In the mean time, Guy of Lusignan travelled to Europe, to the new King of England, Richard the Lionheart, and won Richard over to help in the Crusades and win Guy's throne back, but Conrad had already won back the fortress of Acre, so a compromise was made, with Guy as King and Conrad as the sole heir of the kingdom as well as the governor of Tyre, Beirut, and Sidon. As the Kingdom of Jerusalem fell, tension increased between Richard and Conrad, two of the greatest military commanders of the time, until 1191, when a dispute over ownership of S 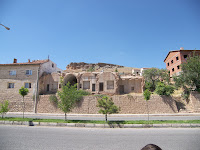 eljuk hostages led to Richard killing all the hostages and Conrad fleeing to Tyre. Saladin no longer needed to fight, with the strife between Richard and Conrad doing the job for Saladin. After Saladin had approached Richard, to make an alliance, Conrad approached Saladin to make an alliance, but in April 1192, Richard and Conrad held a vote to see who should be king, and Conrad was elected. Richard gave Guy of Lusignan Cyprus as a consolation prize, which he ruled until his death in 1194. Conrad's win was short lived, being attacked by two members of a sect of Shia Islam, known as 'hashhashins' (where we get the word 'assassin' from) on April 28, 1192. Although one of the assassins was killed, the other, under torture, said that Richard had sent them, which is very likely, because Saladin had also been attacked by the hashhashins, but no one knows for sure. Richard was a marked man when he reentered Europe. When one of Conrad's nephews recognized Richard, captured and imprisoned Richard, and in February of 1194, after being tossed from noble to noble, Richard was released. Although the hashhashins thrived for another 80 years, their power was lost with the invasion by the mongols.
information from...

By Steven Parissien
Posted by Brahms Lewis at 8:33 PM No comments: