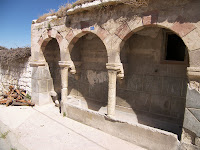 History, in my mind, can be divided into 12 section, or time periods. These periods may not contain all the years, but the contain a large amount of them.

1. The Rivaling Times- the time period before Alexander the Great took the throne. This was the period of time when many small nations in the Near East fought over the land in the fertile crescent.

2. The Imperial Times- the period of time during which the Roman and Greek Empires were around, starting with Alexander the Great and ending with the fall of Western Rome.

3. The Saved Times- The time period after Jesus Christ died for our sins on the cross (A.D.).

4. The Barbaric Times- The time between the end of Western Rome and the beginning of the Holy Roman Empire. This time period was when the barbarians that took the place of Rome were forming their own kingdoms.

5. The Founding Times- The age in between the rule of Charlemagne and the fall of the Byzantine Empire. The starts of actual nations instead of barbarian tribes.

6. The Middle Eastern Times- The period of time while there was an Islamic Empire. This age starts at the death of Muhammad until the invasion of the empire by the Mongols.

7. The Reform Times- The time period when Christianity shifted away from just Catholicism. This period of time was the time of John Calvin and Martin Luther. The age started with the creation of the 95 Theses and ended with the Counter Reformation.

8. The Exploring Times- The period of time when European Nations explored the lands for trade routes and new places to colonize. Starts with Marco Polo and ends around the time of James Cook.

9. The Artisan Times- The time period that flows along with the Reform Times and the Exploring Times that deals with the detail and the realisticness of the paintings/sculptures. Architecture was also a piece of this time period.

10. The Scientific Times- The time during which scientific discoveries were made in large amounts. Starting withe Nicholas Copernicus, this time period includes the ideas of Galileo, Newton, and Bacon.

11. The Industrial Times- The time period during which electricity, steam power, and the assembly line were put into use. Starting in the late 1700's and going on until World War 1, this time period changed people's ways of doing things for good.

12. The Modern Times- The time that looks about what it looked like right now. I'm not saying that things during WW2 were the same, but it was during this time that computers, televisions, and recording devices were created and used during. This period ends about now.
Posted by Brahms Lewis at 4:29 PM No comments: