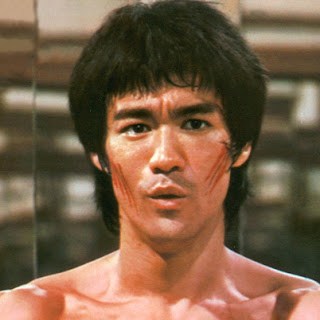 Bruce Lee was born on November 27, 1940 in Chinatown, San Francisco, though three months after he was born, Lee's family moved back to Hong Kong. Lee's father, Lee Hoi-chuen, was a Chinese actor and opera star and his mother, Grace Ho, was the daughter of Sir Robert Ho-tung, a businessman of Eurasian dissent. Because of his connection to Sir Robert, Lee grew up in an affluent and privileged environment, but Lee still got involved in Hong Kong street fights.

After several street fights, Lee's parents decided that he would train in martial arts. In 1954, Lee began to learn Wing Chun martial arts from teacher Yip Man. A year into his teaching, the majority of Yip Man's students refused to train with Lee when they learned about his partially Caucasian ancestry. Lee continued to have private training sessions with Yip Man. When Lee got involved in another street fight in 1959, Lee's parents decided to send him to America. Lee arrived in America with $100 dollars in 1959. Though he initially lived with his sister in San Francisco, he soon moved to Seattle to continue his education. In 1961, Lee enrolled at University of Washington, where he majored in drama, though he later claimed to have majored in philosophy. It was at the University where he met Linda Emery, whom he would marry in 1964 and have two children with.

Lee had been involved in films since he was a child since his father was an actor, and this did not change when Lee moved to America. His first acting job in America came in 1966, when Lee played as Kato in the The Green Hornet. This show lasted only one season, and Lee was out of work. It was then that Lee opened up the Jan Fan Institute of Gung Fu. Lee believed that traditional martial arts were too slow and formalistic and thought that in practical scenarios, like street fights, people should be faster and be able to adapt to the situation. Bruce Lee would go to the Long Beach International Karate Championships, where he would display some of his techniques, such as the "One-inch punch" and the "Two-finger push-up." Lee also continued to work in movies, choreographing fight scenes in movies like The Wrecking Ball and A Walk in the Spring Rain. In 1971, Lee signed a contract with Golden Harvest to create The Big Boss and Fist of Fury, which elevated Bruce Lee to stardom. He continued to make films, becoming more famous as he did, starring in Way of the Dragon, Game of Death, and Enter the Dragon.

Bruce Lee collapsed on May 10, 1973 while doing dubbing work for Enter the Dragon. Because he was suffering from seizures and headaches, Lee was rushed to the hospital, where he was diagnosed with cerebral edema, which is an excess accumulation of water within the brain. Lee died on July 20 of that year after the same symptoms occurred. Lee's wife had him buried in Seattle, and such people as Steve McQueen, James Coburn, Chuck Norris, and George Lazenby came to his funeral. Bruce Lee is on our list of people because he was an icon in American and Chinese film and was one of the only non-white American films stars of his time.

Posted by Brahms Lewis at 2:05 PM No comments: