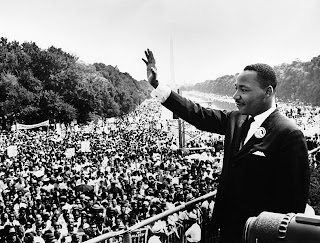 Martin Luther King Jr. found himself in the middle in the center of what would become known as the American Civil Rights Movement. King was one of the leaders of the African American civil disobedience protests. In these protests, African Americans would disobey laws while not violently protesting. This disobedience included going into whites-only restaurants, refusing to give up seats for white people on buses, and protesting discriminatory businesses altogether.

On August 28th, 1963, Martin Luther King Jr. delivered a speech to the hundreds of thousands of people who showed up to the March on Washington. Standing in front of the Lincoln Memorial, King spoke the immortal words "I have a dream." The speech, which became known as the "I Have A Dream" speech, showed King's hope of a world with full equality for all men. That speech became one of the most famous speeches of the 20th century, and that moment came to represent the entire Civil Rights Movement.

Posted by Brahms Lewis at 9:29 PM No comments: