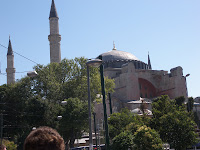 The Holy Place of the Roman Empire

In Istanbul lies one of the greatest churches to ever be built. Hagia Sophia, or 'The Church of Holy Wisdom' was first built by Emperor Constantine, the first Christian Emperor of Rome. Unfortunately, the church was destroyed and had to be rebuilt by Constantine's son, Constantius II, but was, again, destroyed. Emperor Justinian I resolved to build the church again, but to such a scale that nobody would ever want to destroy it again. Starting in 532, the project took 10,000 men to build and a legion of priests to continually pray over the construction sight. Hagia Sophia's dome, measuring 182 feet high and 100 feet across, was the one largest of its time, 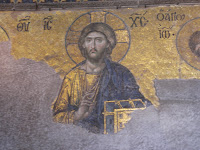 second to only the Pantheon, in Rome. Justinian succeeded in making it so great that it would never be destroyed, for when the Ottomans invaded in 1453, they were so amazed that they turned it into a mosque by adding a few minarets (Towers built next to mosques). The Ottomans helped to preserve many of the original Roman artistry on the walls of the building when they plastered over them. Because of this preservation, many of the mosaics and paintings are still there for tourists to enjoy today.

Information from...
Wonders of the Ancient World By Justin Pollard
Posted by Brahms Lewis at 7:18 PM No comments: