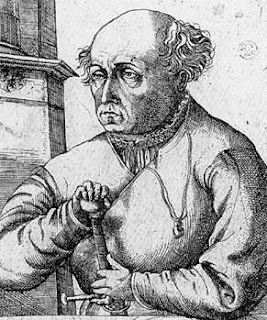 As a physician, Paracelsus pioneered the use of chemicals and minerals as forms of medicine, and often found himself in disagreement with traditional medical books. Paracelsus's arrogance led to him being kicked out of the University of Basel's staff and out of the city of Basel. Paracelsus wandered Europe in search of knowledge. He would take old manuscripts and revise them. In 1536, Paracelsus published Die grosse Wundartznei, which helped Paracelsus to regain some fame.

Paracelsus was known for burning traditional medical manuscripts, and many attributed this to his upbringing as a Lutheran. Paracelsus rejected the idea, saying that himself and Luther both have their own ideas and each is simply defending them, though their ideas are quite different.

At the age of 47, in the year 1541, Paracelsus died of natural causes and was buried in  Salzburg. Paracelsus is on our list for being an outstanding figure of both medicine and alchemy during the same time.

Posted by Brahms Lewis at 5:22 PM No comments:

The Sack of Rome (August 24th) 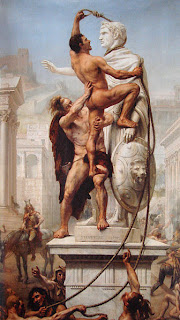 After Theodosius died, the peace between the Romans and the Visigoths quickly disintegrated, leading to the the top general, Flavius Stilicho, chasing the Visigoths out of Italy. When Eastern Roman Emperor Arcadius died, Honorius, the Western Emperor, decided to go to Rome. Stilicho forbade his leaving Rome and suggested that he go instead. Rumors spread that Stilicho wanted to put his own son on the throne. Olympius, a Roman politician, staged a mutiny within the army and convinced Honorius that Stilicho was a threat.

Stilicho was soon executed, and the Roman Army was soon in chaos.Much violence broke out against the slaves and barbarian soldiers residing in Italy. Many of the persecuted people fled from Italy and sided with Alaric. Alaric's army grew by several thousand, and he was soon able to attack Rome.

In 408, the Visigoths attacked the great city of Rome, and starvation and diseases rapidly spread through the city. Alaric was given 5,000 pounds of gold and 30,000 pounds of silver along with silk and pepper in order to stop the siege.

Encouraged by Pope Innocent I, Honorius decided to make an alliance with the Visigoths. When Alaric demanded the title of Magister Militium, Honorius refused and sent Alaric an insulting letter. When Alaric intercepted a force of soldiers being secretly brought into Rome, he was furious and laid siege to Rome once more.When starvation returned, the Roman Senate surrendered again, and Alaric pressured them to appoint a new military leader.

When a treaty was almost reached between Honorius and Alaric, a Gothic commander allied with Honorius attacked Alaric. Alaric defeated the Gothic raiders and traveled to Rome, laying siege to the city for a third time. On August 24, 410, slavesopened Romes gate and Visigoths looted the city for three days.

This was the first time Rome had been sacked in 800 years, and it showed Rome's growing weakness and vulnerability. The eternal city was falling. In less than seventy years from the sacking of Rome, the last Western Roman Emperor, Romulus Augustus, would be dethroned.