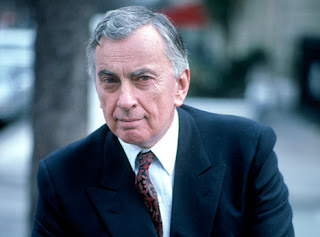 Eugene Louis Vidal, Jr. was born in the United States Military Academy in West Point, New York on October 3, 1925. He was the son Eugene Luther Vidal, an aeronautics instructor at the Academy, and Nina Gore, a socialite and Broadway extra. Vidal's grandfather, Thomas Gore, was a Democratic senator from Oklahoma. Vidal was raised in Washington, D.C., and when World War II broke out, Vidal enlisted in the US Navy. Vidal worked as a warrant officer until he contracted hypothermia and developed rheumatoid arthritis. After that, Vidal became a mess officer. When Vidal realized that he wanted do be a political leader and writer, he changed his name to Gore Vidal because it was a unique and memorable name.

Vidal began his writing career at the age of nineteen, when he wrote Williwaw, a novel about World War II. Two years later in 1948, Vidal wrote The City and the Pillar, which focused on the issue of homosexuality. This book received a mix of reactions. Book critic Orville Prescott found the book so objectionable that he did not allow the New York Times to review any of Vidal's next five books, people within the Gay Rights movement see Gore Vidal as an early champion of sexual liberation. Vidal also wrote plays and scripts during his career. He helped to revise the script of Ben Hur, and he also wrote several of his own scripts, including that of The Best Man and Visit to a Small Planet. Vidal continued to write novels as well, most of which fell into two categories: American history and satire. Vidal also wrote many essays and pamphlets, many of which criticized certain parts of the U.S. government, including the military-industrial complex and American expansionism. In 2009, he was given the Medal of Distinguished Contribution to American Letters by the National Book Foundation. Vidal also appeared in several films and television shows, including Gattaca, With Honors, The Simpsons, and Family Guy.

Gore Vidal had a very active role in American politics as well. In 1960, Vidal ran for Congress under the Democratic party and was supported by many, including Eleanor Roosevelt and Paul Newman, but lost by a margin of 57% to 43%. He was also a chairman of the People's Party from 1970 to 1972, and ran against Jerry Brown for the Democratic primaries for the seat in the United States Senate. Vidal also claimed that Roosevelt had provoked the Japanese into attacking Pearl Harbor and that Truman dropped the atomic bombs even though the Japanese had already asked to surrender. Vidal was an advisory board member of the World Can't Wait group that advocated the impeachment of George W. Bush for war crimes.

Vidal died while in his home in California on July 31, 2012 due to complications from pneumonia. Vidal makes our list because he was a major figure in two major fields. He was both a politician and writer, and he was respected in both of those fields. Vidal was involved in many projects spanning from the film industry to the American political arena and worked with such people as Eleanor Roosevelt, Paul Newman, Ralph Nader, and many others. He not only lived in the world we see, he was involved in its formation.