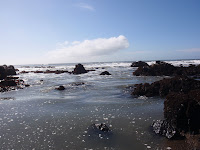 In 1260, two Venetian merchants, Maffeo and Nicolo Polo, made their way East, to the palace of Kublai Khan, the Emperor of the Mongols. When they made it to the capital of the Mongol Empire, Kublai Khan was most hospitable and when he sent them away, he also sent a letter to Pope Clement IV, asking for 100 learned men to teach on Christianity. Although the Pope did not send the men, he sent a letter and precious gifts back to Asia in 1271 with Nicolo, Maffeo, and Marco Polo (1254-1324), Nicolo's son. Marco Polo soon became a favorite of the Great Khan's and went on several special missions to China, Burma, and India during his 17 years in the Khan's court. After coming back to Venice in 1294, Polo served in a war against the city of Genoa, and was captured. During his year in prison, Marco dictated an account of his time in Asia to Rustichello of Pisa, a writer of romances. The book was published and is now known as The Description of the World or The Travels of Marco Polo. Although Polo's book was accused of being full of lies, which it probably was, the book was read all over Europe. After he was set free, Polo was still left with some precious items from Asia. These items and Polo's book inspired and basically started the Age of Exploration. Marco Polo is the Number 1 explorer because his book and items from Asia almost fully started the Age of Exploration in Europe and inspired some of the other great explorers, such as the well-known Christopher Colombus.
Posted by Brahms Lewis at 6:49 PM No comments: