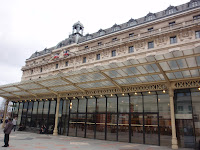 Today in History:
Vincent van Gogh (1853-1890) was born in Zundert, The Netherlands and is considered one of the greatest painters of all time. As a young man, van Gogh was very interested in religion and helping the poor, and though he started studying theology in 1877, he dropped out a year later. After dropping out, van Gogh became a layman preacher in a mining region of Belgium. After 6 months, he was dismissed, though he went on without pay. It was in this region that he started producing charcoal sketches. 1n 1880, van Gogh took lessons from Anton Mauve at the Hague, due to the suggestion of his brother, Theo. Although these lessons helped van Gogh in his loose brush strokes and use of lighting, van Gogh favored dark-toned colors, unlike Mauve. Van Gogh's failed marriage proposal to his cousin and dismissal from the art academy of Antwerp drove van Gogh into depression. To try to help, Theo allowed van Gogh to move in with him, in Paris. In Paris, Vincent met painters such as Edgar Degas, Camille Pissarro, Paul Gauguin and Henri de Toulouse-Lautrec. In Paris, van Gogh learned the technique known as pointillism, or use of small, colored dots that merge in the eyes of the beholder into a full picture. In 1888, van Gogh left Paris and moved to Arles, where he hoped to found an art colony. Paul Gauguin came to work with van Gogh for two months, where they painted much, but as time went on, there friendship deteriorated, and on Christmas Eve of 1888, van Gogh attacked Gauguin with a razor, and after failing to wound Gauguin, Van Gogh ran off, cut off his left earlobe and sent it to a prostitute friend of his. The next year, at his own request, van Gogh was admitted into a psychiatric center. He left the clinic a year later, and after a fit of painting activity, van Gogh shot himself in the Chest, dying two days later, at the age of 37. His work started to become famous at a large exhibition in Paris in 1901. His paintings, such as The Starry Night, his Self Portrait, and Dr. Paul Gachet, have become some of the most famous paintings of all time.
Information from...
http://www.biographyshelf.com/vincent_van_gogh_biography.html
and
http://www.vincentvangoghart.net/
Posted by Brahms Lewis at 11:01 AM No comments: