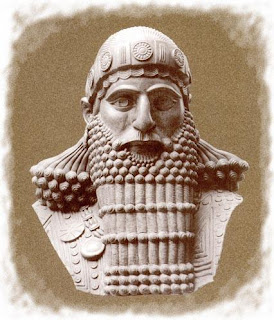 Hammurabi was born somewhere around 1792 BC. Hammurabi was the sixth king of the First Babylonian Dynasty. At the time, Babylon was one of many city-state cultures that lived in the fertile crescent of Mesopotamia. Babylon had gained some prominence due to its culture's literacy and its military power. By the time Hammurabi came to power, Babylon had conquered the city-states of Borsippa, Kish, and Sippar. Babylon, though, still was just one of many city-states in Mesopotamia. At the beginning of his reign, Hammurabi remained peaceful, working on strengthening city walls and expanding the city's temples. Later on, however, Hammurabi formed an alliance with the kingdom of Larsa to defeat the kingdom of Elam, which controlled a major trade route. Larsa did not, however, contribute the amount of military aid promised, so after defeating Elam, Hammurabi attacked and defeated Larsa as well. This gave Babylon control of the entire lower Mesopotamian plain by 1763 BC. Hammurabi soon turned to attack the northern Mesopotamian kingdoms, including some of Babylon's previous allies. Soon, Hammurabi controlled the majority of Mesopotamia, with only two major city-states remaining independent. Like most leaders, Hammurabi established a code of laws. The Code of Hammurabi helped to maintain order and control throughout the Babylonian Kingdom. The Code of Hammurabi is famous due to the fact that it is one of if not the earliest written law code in the world. The 282 laws written on 12 tablets contained some of the most famous laws, including "An eye for an eye, and a tooth for a tooth." These laws helped to keep everything fair and even within his kingdom.

Hammurabi helped to turn Babylon into one of the most powerful kingdoms in the world. He also created a law code to keep this empire in order. His creation of the written law code has changed the world in a way that I cannot explain. So I won't.

Posted by Brahms Lewis at 4:41 PM No comments: