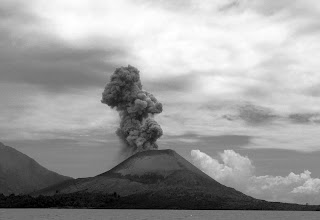 Krakatoa is an Indonesian island that is the result of three volcanoes: Rakata, Danan, and Perbowatan. These three volcanoes had been active for hundreds of years, but the eruption in 1883 would be what made these volcanoes the most famous in the world.

By 1883, the area surrounding Krakatoa had been having seismic activity around the volcanoes for several years, some were so strong, they were felt as far off as Australia. In May of that year, steam began regularly venting from Perbowatan, and small eruptions of ash reached altitudes of 20,000 ft.  By the end of May, all activity had died down, but the volcanoes began erupting again around June 16th, covering the island in a black cloud. The eruptions reached their highest level of intensity on August 25th, and by the 26th, it was evident that a greater eruption was yet to come.

On August 27th, 1883, four explosions occurred on the small island of Krakatoa. At 5:30am, Perboewatan volcano erupted, creating tsunamis going North. At 6:44am, Danan volcano exploded, sending tsunamis both East and West. At 10:02am, the largest explosion took place, and was heard 3,110 km south in Perth, Australia and 4,800km west in Mauritius, where the sound was mistaken for distant cannon fire. The energy released in this explosion alone was said to be equal to 200 megatons of TNT, or four times the energy created by the Tsar Bomba, the most powerful thermonuclear weapon ever detonated.

At 10:41am, a landslide on Rakata volcano caused the fourth and final eruption. The pressure created by the last explosion radiated out from the volcano at 1,086 km/h (675mph). The blast was so powerful, it blew out the eardrums of sailors in ships nearby. The pressure also caused a 2 and a half inch spike of mercury in pressure gauges in Batavia, and records from barographs around the world continued to pick up the volcano's shock-wave for the next five days. From these records, it has been concluded that the last eruption's shock-wave reverberated around the world seven times in total.

Hot ash from the volcano fell in Ketimbang in Sumatra later on the 27th, and approximately 1,000 people died. On the nearby island of Sebesi, only 13km off from the volcano, 3,000 were killed. Many settlements in the area were destroyed by the 30m tall tsunami. Smaller waves caused by the volcano were recorded as far away as the English Channel.

The volcanic ashed forced into the atmosphere by the eruption lowered the earth's temperature by 1.2 degrees Celsius, and it took five years for the temperature to return to normal. This ash also caused the sky to redden around the world. In New York, it was said that the sky was so red, many believed that there was a fire. In other areas, a Bishop's ring, or halo, formed around the sun.

Posted by Brahms Lewis at 9:20 PM No comments: