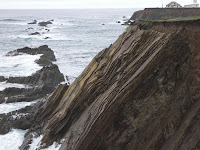 Sir Francis Drake (1540-1596) was a British explorer and privateer under the rule of Queen Elizabeth I. Drake was the first explorer after Magellan to sail around the world. He went below South America, like Magellan, but once he got to the Pacific, Drake went up the coast of America, and made it at least all the way to California before crossing the Pacific. After landing in Indonesia, Drake made his way past the Cape of Good Hope to England. Upon his return, Drake was rewarded with 10000 pounds. As a privateer, Drake helped England defeat the Spanish Armada, a fleet of 130 ships and 30000 Spanish men. Although many say that Drake is famous for being the first Englishman to circumnavigate the world, Drake makes our list for exploring the Western coast of America and for helping to defeat the Spanish Armada.

Posted by Brahms Lewis at 5:25 PM No comments: