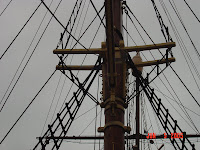 During the Age of Exploration, many explorers roamed the seas in search of riches, spices, and new lands to colonize. Being one of my favorite times in history, I am going to write about the Explorers. Over the next few weeks, I will rate the Top 20 Most Important Explorers. I will name them, give a description of their accomplishments, and explain why they are on my list. Enjoy!

Sir Martin Frobisher (1540-1594) was an English privateer who went to North America in search of the Northwest Passage, an sea route to Asia by going above or through North America. In 1576, he went out on his first trip to America, finding what he thought was gold, but was actually pyrite. On this trip, he also claimed Baffin Island and Resolution Island for Englan. In 1578, Frobisher went back to America, bringing 15 ships up the Hudson Strait and set up a mining settlement in Frobisher Bay. Later in his career, Frobisher became the vice admiral on Sir Francis Drake's voyage to the West Indies. Frobisher died on November 22, 1594 after getting wounded while fighting the Spanish. Frobisher is in the Top 20 Explorers for finding and claiming one of the largest islands in the world, Baffin Island. He also earns extra points for supposedly having the 1st Canadian Thanksgiving.

Information From...
www.enchantedlearning.com
Posted by Brahms Lewis at 6:29 PM No comments: