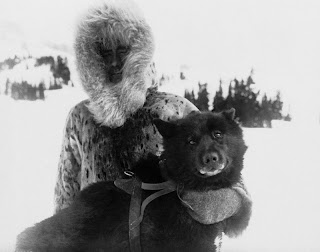 Gunnar E. Kaasen was born on March 11, 1882 in Burfjorddalen, Norway, the son of Hans and Anna Kaasen. In 1903, Kaasen headed to the United States to mine for gold, after the discovery of gold in Cape Nome in 1898. Although the gold rush was over by 1905, Kaasen was able to find work in Nome as a musher, or dog sledder. The work was profitable and in high demand because the port of Nome is usually ice locked between October and June each year.

In 1925, an outbreak of diphtheria spread rapidly through the city of Nome. Many of Nome's residents, especially the Inuit children of the town, had little to no immunity to diphtheria and needed medicine. Unfortunately, Nome's diphtheria antitoxin supply had run out. With no trains, no planes, and a frozen port, Alaskan Governor Scott Bone decided that the only way to get serum to Nome was to transport it from Anchorage to Nome by dogsled. The 674 mile (1,085 km) trek was divided up into twenty legs, each manned by a different musher and a different team of dogs. Gunnar Kaasen was scheduled to run the second-to-last leg of the route with his dog Balto and twelve other huskies. By the time the antitoxin reached Kaasen, the route was covered by a massive storm. It was said to be so bad that Kaasen could not see the dogs closest to the sled and that the winds almost blew the serum off of the sled. At 2am on February 2nd, Kaasen reached the end of his leg. Because Kaasen reached the end of his leg ahead of schedule, the next musher, Ed Rohn, was asleep and no one was at the transfer location to meet Kaasen,so despite the storm, the cold, and his tired dogs, Kaasen led his dogs onward to complete not just his own leg, but the remaining 25 miles (40 km) to Nome as well. Kaasen reached Nome at 5:30am. Kaasen and his dog team had traveled 54.3 miles (87 km) total. Kaasen delivered the serum to Dr. Curtis Welch, who destributed the serum. There were no further deaths from the disease in the city after that.

Kaasen received a medal from the Governor of the Alaska Territory and a daily wage of $30 dollars from the government along with all other mushers. Kaasen himself became a celebrity along with his dog Balto, whose statue is now standing in Central Park in New York City. The Iditarod Trail Sled Dog Race commemorates the 1925 serum run. Kaasen moved to Everett, Washington in 1952, where lived until his death on November 27, 1960.

Posted by Brahms Lewis at 9:07 PM No comments: