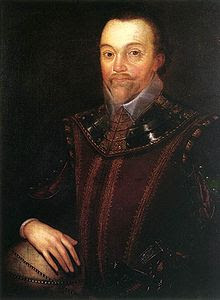 Sir Francis Drake was an Englishman born, supposedly, in 1544. He was the eldest of twelve sons born to a Protestant farmer, Edmund Drake. His family fled from Devonshire to Kent during religious persecution during the Prayer Book Rebellion. In Kent, Edmund Drake found a job ministering to men in the King's navy. Because of this job, Francis Drake became an apprentice on a  coastal merchant ship.

Drake made his first trip to the New World when he was 23. In 1572, Drake went on his first major independent expedition, in which he planned to attack the Isthmus of Panama, where he succeeded in capturing the city of Nombre de Dios along with silver and gold on its way to Spain from Peru. Drake stayed in the area for over a year, working with pirates and the French to get out of Panama with the gold. His success in Panama brought him fame, and in 1577, Queen Elizabeth I sent Drake to start an expedition against Spain in the Pacific. He left England with six ships, though three were deserted before they reached the Pacific. Drake   was able to make it to Cape Horn, and his route is now known as Drake Passage. When he reached the Pacific, Drake had only one ship remaining. Drake sailed up the Pacific coast of America, taking 37,000 ducats worth of money from Spanish Peru. Drake made it as far north as California, somewhere north of Point Loma. He crossed the Pacific, reaching Indonesia, the Cape of Good Hope, and in 1580, Sierra Leone. Upon returning to England in the same year, the amount of spices and Spanish treasure brought home was so large that the half-share given to the Queen surpassed the rest of the crown's income for the entire year. This made Drake the second person to lead an expedition around the world. Drake was knighted, though he was sworn to secrecy about the expedition. After a slight political career, Drake began sailing again when war broke out between Spain and England in 1585. He sacked Santo Domingo and Cartagena along with the fort of San Augustine. When Drake found out about a Spanish invasion of England, he captured the Spanish ports of Cadiz and Corunna, which delayed the invasion by another year. When the Spanish Armada finally came, Drake led an invasion and relied mainly on fire-ships (Ships set on fire) to break the formation of the Spanish Fleet and make them flee into open see, where Drake led the British fleet into battle. The victory of the English established Britain as the dominant naval power in the Atlantic/

At an age of about 55, Drake died of dysentery, leaving no sons, though he had two wives. His estate went to his nephew, Francis. Drake wasn't very important, but it is a known fact that nobody cares about second place. They only care about who's in first. Drake is on this list because even though he was the second person to circumnavigate the world, he still acquired fame.

Posted by Brahms Lewis at 12:25 PM No comments: