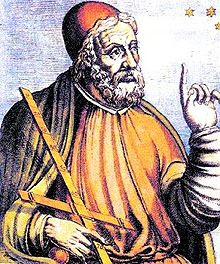 Claudius Ptolemy was a Roman citizen born around the year AD 90, and he lived in Egypt under Roman rule. Ethnically, Ptolemy was Greek, and all of Ptolemy's works were written in Ancient Greek.

One of Ptolemy's most important surviving works is the Almagest, which is the only surviving comprehensive ancient document on astronomy. Using Babylonian astronomical data and Greek mathematics, Ptolemy created tables to predict the positions of planets in the future and the past. Also, Ptolemy created a star catalog, including forty-eight constellations. One of the key problems in Ptolemy's work was the idea of a geocentric universe, where everything revolved around the Earth. He explained the back-and-forth movement of planets by stating that the planets had sub-orbits within their larger orbit around the Earth. Because it was one of the few astronomical documents to survive into the Middle Ages, it was considered the law on astronomy during that time, and his geocentric ideas were not disproved until Nicolaus Copernicus wrote De revolutionibus in 1543. Ptolemy also wrote Planetary Hypotheses, which used his planetary model to compute the dimensions of the Solar System. Ptolemy also wrote Geographia, a work which mapped out the known world. His maps goes from Cape Verdes in the West to the middle of china in the East, and is fairly accurate considering the time this map was made. Ptolemy knew that his map only covered a quarter of the globe, but his map was still used widely up through the Middle ages. Ptolemy also wrote on astrology, where he predicted the future of people while also taking into account differences in race, country, and upbringing. Ptolemy is also remembered through his works Harmonics, where he argued that musical intervals should be based on mathematical ratios, and Optics, in which Ptolemy wrote on the properties of light, reflection, refraction, and color.

Ptolemy died around the year AD 168. Ptolemy is listed on this list before Copernicus because not only did he work in more fields, but also because Ptolemy's works helped for the scientific basis for Europe in the Middle Ages, where they turned into a legend, calling him Ptolemy, King of Alexandria. Copernicus wasn't called the King of  Krakow. Also, Ptolemy has two craters (one on the Moon and one on Mars) named after him.