The Edict of Nantes (August 13th) 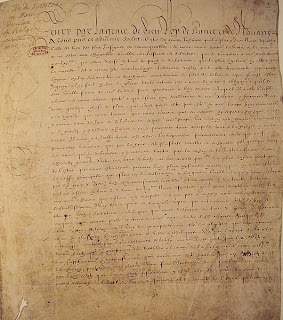 In the late 1500s, France was caught in the middle of its own Wars of Religion. The Protestant Reformation was sweeping across Europe, and France had been in the middle of the entire movement. Though the French crown remained Catholic, many French citizens were converting to Protestantism. This caused many riots, rebellions, violence, and wars within France.

During this period of time, Henry IV was the king of France. Henry IV was raised Protestant and only converted to Catholicism when he inherited the crown. Throughout his life, though, he remained sympathetic to the Protestant cause.

On August 13th, 1598, Henri IV signed the Edict of Nantes, which was meant to stop internal violence from religious differences. The Edict granted  certain privileges and protections to Protestants, but reaffirmed Catholicism as the established religion of France. The Edict ensured rights for Protestants within France and protected them from forces outside of France, including the Spanish Inquisition.

The Edict remained in effect until Louis XIV renounced it in 1685, declaring Protestantism illegal. This led to a mass exodus of almost 400,000 Protestants from France to England, Prussia, the Netherlands, Switzerland, and South Africa. This took away many skilled workers from France, putting back France's economy. The rights given to Protestants in the Edict of Nantes were not reestablished until the Edict of Tolerance in 1787.

Posted by Brahms Lewis at 9:36 PM No comments: