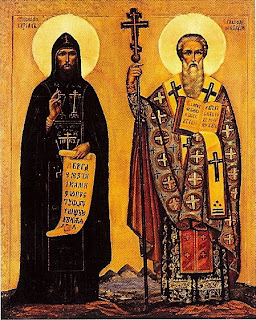 Constantine and Methodius were two Byzantine brothers born in the city of Thessaloniki. Methodius was born between AD 815 and 820, and Constantine was born between AD 827 and 828. Constantine is better known as Cyril, the name he took shortly before his death. After losing their father when Cyril was fourteen, the minister Theoktistos became their guardian. Theoktistos taught the two brothers and even gave Cyril a job at the University of Magnaura.

Cyril, in his education, mastered theology and could speak both Arabic and Hebrew. His knowledge helped him to acquire a mission to the Middle East from the Byzantine Empire. cyril was sent to the Abbasid Caliphate under Caliph Al-Mutawakkil. Cyril was sent to discuss the idea of the Holy Trinity with theologians there and improve Abbasid-Byzantine relations. Cyril played a major role in easing tension between Christianity, Islam, and Judaism. Cyril also worked in the Khazar Khaganate, in which people of all religions could live in peace.

In 862, Prince Rastislav of Great Moravia asked Emperor Michael III and Patriarch Photius to send missionaries to Great Moravia. Cyril and Methodius were chosen for the mission with the goal of spreading Christianity and Byzantine influence. When Cyril and Methodius arrived, they began to create a written Slavic alphabet, known as the Glagolitic alphabet. This alphabet was the first alphabet used for Slavonic manuscripts, and has become today's Cyrillic alphabet, which is used in Eastern Europe. After developing the alphabt, the brothers were able to quickly translate the New Testament and the Psalms, followed by the Old Testament. In 867, the brothers went to Rome at the request of Pope Nicholas I. There was a dispute over whether the brothers or Theotmar, the Archbishop of Salzburg, had ecclesiastical control of Great Moravia. the dispute was settled when the brothers won the favor of Pope Adrian II. Unfortunately, Cyril died fifty days after this decision on February 14, 869.

Methodius continued to work with Slavs, though now in the Balaton Principality. Methodius was allowed to work in Great Moravia and the Balaton Principality because he had been named as the archbishop of Sirmium by Pope Adrian II. Later, under Pope John VIII, Methodius was given jurisdiction over Serbia as well. Many people, including King Louis the German, were angered by the archiepiscopal claims of Methodius, and Louis had Methodius imprisoned for two and a half years in Germany. Rome, though, sided with Methodius, and sent an ambassador to reinstate Methodius. Methodius remained archbishop until his death on Abril 8, 885.

Saint Cyril and Methodius are in our list for several reasons. the two were able to be on friendly terms with both the Pope in Rome and the Patriarch in Constantinople. The two were also responsible for the creation of the Cyrillic alphabet, which millions of people use today. These two brothers were involved in the political, religious, and intellectual wolds at their time and that deserves some recognition.