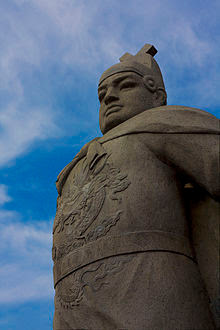 Ma He was born in China in AD 1371. He was born the second son of a Muslim family in Yunnan. In 1381, Ma He's father was killed during the Ming conquest of Yunnan from the Yuan dynasty. Ma He was captured and was made a eunuch before being sent to Zhu Di, the son of the emperor. Ma He became an advisor for Zhu Di and helped Zhu Di in a revolt against the Jianwen Emperor. For his valor in battle, Ma He received the name Zheng He, or Cheng Ho. Under Zhu Di, or the Yongle Emperor, Zheng He became the Eunuch Grand Director and later became the Chief Envoy.

As Chief Envoy, Zheng He carried out naval expeditions for the Ming Government. The purpose of these missions was to establish a Chinese presence and dominance in Indian Ocean trade. Zheng He's first mission started in 1405 with a crew of 28,000 men and 317 ships. This expedition and others brought Zheng He to Arabia, Brunei, Africa, India, Southeast Asia, and Thailand. Zheng He traded gold, silver, silk, and porcelain for items such as ivory, ostriches, zebras, camels,and giraffes. Zheng He's mission to establish China as a player in Indian Ocean trade sometimes took military might. Zheng He helped capture Chen Zuyi, a feared pirate, along with waging a land war in Ceylon, or Sri Lanka. He also did not back down when threatened by Arabian and East African merchants. When the Yongle Emperor died in 1424, the new emperor put an end to Zheng He's expeditions.  Zheng He made one last trip under the Yongle Emperor's grandson, the Xuande Emperor.In 1433, during this last voyage, Zheng He died at sea.

Though Zheng He is only known to have sailed in the Indian and Eastern Pacific Ocean, some speculate that Zheng He made it into the Atlantic. Zheng He makes our list of great people because of how well traveled he was. He was able to established Chinese dominance in the Indian Ocean trade and was even able to do this at a point of great isolationism in China.

Posted by Brahms Lewis at 12:27 PM No comments: