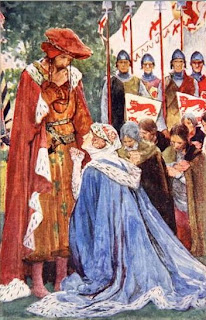 In the year 1346, Edward III of England began a siege on the French port of Calais. Edward wanted to conquer France for England, but to do so, he needed a deep-water port to ferry troops and supplies from England to France. Calais was the perfect port for the job, it was a port close to England that was both large and fortified.

For months, the citizens of Calais resisted the English. After their supplies ran out, the citizens began to eat their dogs, then their horses, and then the cats and rats in the cities. Calais waited for French aid, but none came, so though their defenses withstood the English attacks, starvation forced the city to surrender.

The siege had lasted a total of eleven months, much to the annoyance of King Edward III. He was so annoyed, in fact, that he ordered  that the six most important men of Calais, known as the burghers, were brought before him, barefoot, wearing only their shirts, with ropes around their necks. 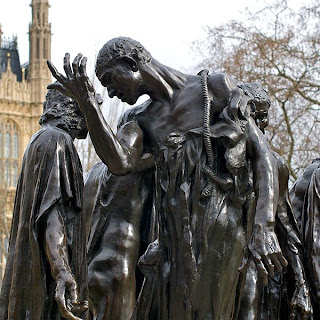 It is unclear what Edward was going to do to the burghers, but whatever he planned, it was not pleasant, but before he could do anything, his wife, Queen Philippa, stepped in. She is said to have knelt before the King and begged him to show mercy to the burghers. Edward was touched by his wife's actions, and the burghers were set free. This story was so moving, it inspired the sculptor Auguste Rodin to make a sculpture of the event. In the end, though the burghers were set free, Calais remained in English hands until the time of Mary Tudor.

Posted by Brahms Lewis at 7:36 PM No comments: