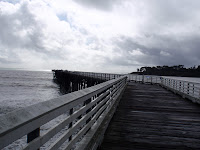 Jaques Cartier (1491-1557) was a French explorer during the reign of King Francis I. In 1531, Francis commisioned Cartier to find the Northwest Passage. With his two small ships and 61 men, Cartier went to Canada and discovered the Magdalen and Prince Edward Islands. He also claimed the Gaspe Penninsula for France before returning home. in 1535, Cartier was sent to America again, but this time, Cartier went up the St. Lawrence Rivere, which he had mistaken for a bay in his previous trip. As he went down the river, he established Mont Real, or Montreal, which would later become a major Canadian city. After spending a winter with the Huron Indians, Cartier kidknapped 12 of the peace-loving Native Americans and brought them back to France. Although he hoped that they would tell him where their gold mine was, there was never a gold mine to begin with. Cartier later betrayed a fellow Frenchman when they had combined forces to found a start a French colony with former prisoners. Cartier has become one of the greatest explorers in history because of his many findings in Canada, his founding of Montreal, and his use of other people to get what he wanted.

Posted by Brahms Lewis at 4:53 PM No comments: