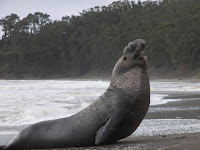 This blog is called the History Dropoff because it is where I drop off facts on mainly history, but I use this blog to keep my family from having to listento me, so I also dropoff other information, like this post.

The Elephant Seal is a species of seal that comes in two types of species. The Northern Elephant Seal is known as Mirougna angustirostris and lives on the coast of California and Mexico, while the Southern Elephant seal, Mirougna leonina, lives only in the southern hemisphere, in places such as New Zealand, South Georgia, Antartica, etc. Elephant seals are marine mammals that come together only to breed. The Northern variety breed in January and February, but the Southern species mates from September to October. Although Elephant Seals are clumsy on land, they can swim with great power deriving from the alternating hind flippe 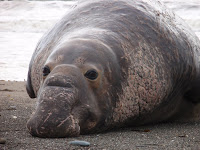 rs, which they can use to catch fish and squid. The most unique feature of an elephant seal is its large nasal cavity, which only appears on males and takes 8 years it to fully develop. During mating season, the cavity fills with blood and is able to amplify aggressive roars. Along with having an odd nose, male elephant seals also have many other traits that females do not, which the bulls use during battles for dominance. Males can weigh up to 2300kg more than a female, weighing in at about 3200kg (7055lb). Males are also longer than females and can be 4.9m (16ft) long. Other outstanding battle traits used by bull Elephant Seals are tough neck skin acquired as a youth and enlarged canines. Elephant seals can have cubs when the male is 4 to 6 years old and the female is 2 to 3 years old, and after 11 months, the seal gives birth to a youth, which will hopefully live for another 20 years. Although Hooded seals (Cystophora cristata) also have traits like those of an Elephant Seal, they're not as large as Elephant seals, and their nasal cavities are no match to those of an Elephant Seals, the Elephant of the Sea.


Infromation from...
The Encyclopedia of Animals
Consultant Editor: Dr. Per Christiansen
Posted by Brahms Lewis at 6:07 PM No comments: