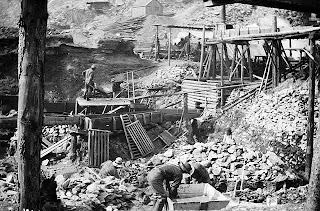 Indigenous people had known of the existence of gold in the Yukon Territory of Canada for a long time, but both the Russians and the Hudson Bay Company in the region had ignored the rumors and chose to fur trade instead. There were several prospectors in the area, but none had struck real luck prior to 1896.

On August 12th, 1896, the American George Carmack was travelling with his wife, his brother-in-law, and his nephew south along the Klondike River. The group had followed rumors from previous prospectors and had discovered gold along the Rabbit, or Bonanza, Creek, a tributary of the Klondike. Since Carmack's wife, Kate, and her brother, Skookum Jim, were both Native Americans, Carmack laid claims for his relatives and himself, and the four began mining the claim soon afterwards. As the four began finding large quantities of gold, news spread and soon, mining camps were built all along Rabbit Creek.

The miners along rabbit creek were all from the Yukon territory because the ice and mountains surrounding the territory stopped the news from getting out. Eventually, mining officials in the Yukon got a message to Ottawa by sled-dog, and the news of gold in the Yukon was out. In the Yukon, or Klondike, Gold Rush, an estimated 100,000 people attempted to reach the Klondike river to make their fortunes. It is also believed that only around 30,000 or 40,000 actually made it. Among the stampeders, to the Klondike was none other than American writer Jack London.

At total of $1,139,000 dollars in gold was discovered. This amount is equivalent to $1,000 million today. This amount of gold found meant that paper currencies increased in value, due to the gold standard tied to the currency. This helped to develop the financial panic of 1896. The amount of people who went to the Yukon and the amount of gold found made the Yukon Gold Rush one of the largest gold rushes in history.

Posted by Brahms Lewis at 9:14 PM No comments: