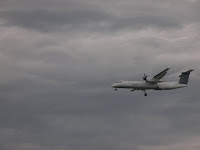 Today (May 21) was the day that both Charles Lindbergh and Amelia Earhart crossed the Atlantic. It was in 1927, at 7:52am on May 20th that Charles Lindbergh went down Roosevelt Field in The Spirit of St. Louis, a monoplane only 28 feet long. After leaving Long Island, Lindbergh went north to Cape Cod and Nova Scotia, crossing the Atlantic over the night. After sighting a small fishing boat, he knew he was reaching Europe, and soon flew over England, Ireland, and soon afterward, on May 21st, landed at the Le Bourget Airport, surrounded by 10,000 onlookers, who mobbed his airplane. Lindbergh had flown 3,610 miles in 34 hours.The next day, in front of the American Embassy in Paris, President Gaston Doumerque of France gave Lindbe 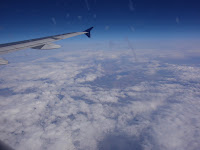 rgh the Legion of Honour. After coming back to the U.S. (by boat) President Calvin Coolidge of the United States presented him with the Distinguished Flying Cross. When Lindbergh arrived in New York, the financial market closed for 'Lindbergh Day', and a parade with 10,000 soldiers and sailors went through the city. On May 21st in 1932, exactly 5 years after Lindbergh arrived in Paris, the American, Amelia Earhart, landed in a field near Londonderry, Northern Ireland after flying 15 hours. She became the first woman to fly solo across the Atlantic. Earhart recieved the National Geographic Society gold medal from President Herbert Hoover of the United States and the Distinguished Flying Cross from Congress, and soon became an early feminist icon. Both Lindbergh and Earhart changed history by what they did on May 21st.

Information From...
Great Stories from History for every day of the year
By W.B. Marsh and Bruce Carrick