The Beginning of Alcatraz (August 11th) 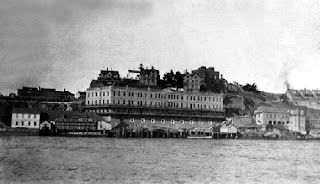 Alcatraz is a small island situated in the center of San Francisco Bay, about 1.5 miles off shore. Native Americans referred to the place as the "Evil island", for they believed it was cursed. Juan Manuel de Ayala charted San Francisco Bay in 1775, naming the island La Isla de los Alcatraces, which translates to "The Island of the Pelicans". The name was eventually shortened to Alcatraz.

In 1846, John C. Fremont bought Alcatraz in the name of the United States for $5,000. In 1850, Millard Fillmore order that the land be set aside for military use. Camp Alcatraz, Alcatraz's first military garrison, was set up after the California Gold Rush began. In 1861, Alcatraz Citadel was created, which was meant to hold Civil War prisoners. Military prisoners began to be put into Alcatraz from the Civil War through the Spanish American War and First World War.

In October of 1933, Alcatraz was acquired by the United States Department of Justice, and the island became Alcatraz Federal Penitentiary. On August 11, 1934, the first 137 prisoners were brought to the Alcatraz Federal Penitentiary. Before it closed, the prison held many of the biggest criminals in American history, including Al Capon, Robert Franklin Stroud (the Birdman of Alcatraz), and George "Machine Gun" Kelly. During its 29 years of operation, the penitentiary claimed that no prisoner successfully escaped, though  a total of 36 prisoners made 14 escape attempts. The only hole in their record was made in 1962, when Frank Morris, John Anglin, and Clarence Anglin escaped, but were reported "missing and presumed drowned" because no bodies were found, yet there was no evidence that they reached the shores of San Francisco Bay.