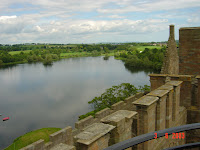 The Gunpowder Plot was a plot created by Catholics to get rid of the Protestant King James I and bring England back to Catholicism. The Catholics were doing this because James had pushed them to the breaking point. He had passed laws against Catholics who refused to attend worship services preformed by the Church of England. The plot's basic idea was to blow up the Parliament building while James was there. On November 5, 1605, the Catholic radicals were about to set the fuse, when Guy Fawkes, who was supposed to detonate the gunpowder, was caught in the act. The guards were able to catch Fawkes because a member of the Catholic group, Francis Tresham, warned his brother-in-law, Lord Monteagle, a Parliament member, about the plot. Monteagle passed the word on and saved Parliament, the King, and England from Catholic rebellion. The day Guy Fawkes was caught is now celebrated in England as Guy Fawkes Day.

Information from...
The Illustrated Encyclopedia of the Kings and Queens of England
By Charles Phillips
Posted by Brahms Lewis at 2:55 PM